This was a very interesting track Jon made a 42 yard shot on this nice 9 point buck. The shot hit right a the third from last rib bone resulting in a liver hit. Two blade RAGE broad head and his arrow completely passed through the buck. He had a decent blood trail for about 50 yards and after that the blood trail disappeared. Jon waited three hours before he started blood tracking. Jon made it to last blood when he notice the buck walking at a very slow pace through the woods so he watched the buck through his bino's. The buck bedded down twice and licked his wounds and would get up and walk off very slow. Jon could see exactly where he hit the buck and he knew it was a fatal shot. Jon backed out and waited till morning before tracking his deer. The morning came and went and Jon still could not find his deer. Jon hunts 60 acres that is surrounded by subdivisions and condo's so the property is basically land lock by homes. The property is laid out with the woods shaped like a "L" shape with a swamp to the east and one to the west and three large tall weed fields to the north. While Jon watched his buck it stayed just on the inside of the woods just behind all the homes. Jon was certain the buck stayed in the woods because the buck would have had to walk up a pretty decent incline to make it to the field to the north and when Jon last saw the buck it looked very week. I started the track with Sypris and she nailed the 50 yard blood trail and after that she could not connect all the dots to make the recovery. After about one hour I decided to go get Scout my seasoned tracking dog. Scout did the exactly same things as Sypris did and once again would could not figure out the line the buck went. So we searched the swamp to the west with no luck and at this point it was looking gleam and I could not believe my dogs are unable to find this buck. So I decided to take scout to the north and check all the deer runs leading in to the tall weed fields. The fourth run I noticed blood on a weed so at this point I was very confident we are finally going to recovery his buck. Well scout totally shut down and was not interested in tracking so once again I went back to the car and grabbed Sypris to complete the track. I told Jon to get on his four wheeler and start grid searching the field while i start Sypris at last blood. Once I got Sypris to last blood she started voicing and took off right in to the field and by the time I was able to stop her she was at the buck. She air scented the buck out in the field. The buck was only 40 yards off the four wheeler trail. When we started tracking in the beginning we flushed a few doe from the woods and while we were field dressing the buck there was three doe standing 75 yards away watching us. Jon said it was not uncommon to see 20-30 deer while hunting. My conclusion on why my hounds were struggled because in the woods was the over abundance of fresh scent masking the old scent. The blood trail was 25 hours old and the buck was almost 100% bleeding internally. The buck made it about 500-600 yards before it took a dirt nap. 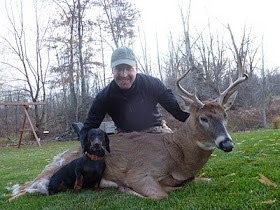