Eric P of South Lion shot this 145 inch 9 point (Jackson county) Devils Lake Buck during his evening hunt(11-12-09)he ended up hitting the buck way back in the paunch. The buck was angling forward at him but when Eric let the arrow go the buck turned for the worse making the angle almost straight on. Eric called me immediately after making the shot to inquire about my service. After our phone conversation we decided to let the buck lay overnight and I would help after work the next day. Eric showed up a little early to try to learn the direction the buck went. He only found two drops of blood within the first 150 yards. Scout started off slow getting distracted by a Raccoon and then by some does that ran past us. After I got him refocused Scout found Two chunks of fat and one more drop of blood. This buck went threw a large open woods and into a swamp witch Scout had to swim threw some water and find the line on the other side then he took us out of the swamp into a peninsula of woods. At this point we are about 2 hours into track and we did not see any more blood to confirm Scout was on the correct buck. He took us up and around a peninsula of woods and at this point I had real doubts that we where going to recovery this buck. Close to the end of the line I picked Scout up to call it quits and Scout wanted out of my arms real bad so i put him down and forty yards up in a thorn patch was Eric trophy. The total distance was about 1200 yards with only 3 drops of blood and the line was 26 hours old it took Scout 2 hours and 20 min. The main reason Scout was able to find this buck was Eric did not push the buck and he did not stomp the area with human scent. Hunters do not realise how much DAMAGE they can do by searching blindly ahead of the last blood. This was Scout farthest recovery and the oldest scent trail to date. Eric with out your help this track my have not been a successful one. Thank you Rob and Scout 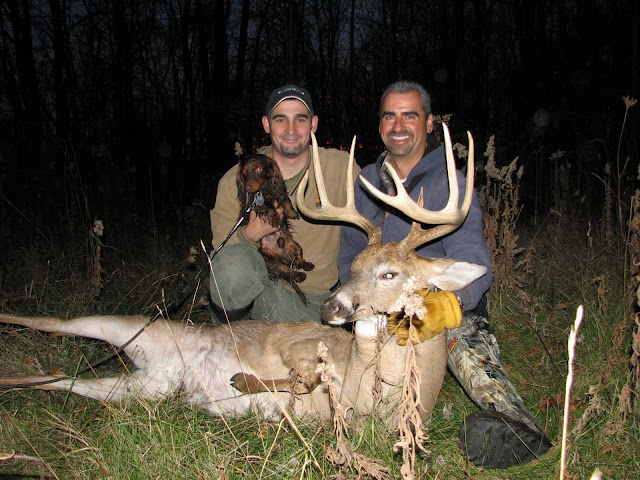 Posted by Miller Deer Tracking at 7:59 AM