Ryan shot the buck at 6 yards from the ground and had a complete pass through with a fixed 3 blade broad head. They tracked the buck 150 yards and the blood was getting very spars. At one point they found two softball size of frothy blood confirming a lung hit. Realizing they were struggling they decided to call in a 10 pound track'n hound "Scout". Scout for what ever the reason did not want to track my clients deer so I started to help them try to blood track with our flash lights. We did this for two hundred yards and then when we could not figure it out scout took over and took us on over a mile long track. At one point we found a wound bed with blood in it and with Scout hot on the trail we decided to push the buck because we thought it was a single lung hit. The buck finally crossed a small river and it was past midnight so we decided to back out and pick up the trail in the morning. Scout picked up right where the buck exited the river and we tracked him up into some high ground. We found a wound bed with blood in it and from there scout took us across a road and started through a cut corn field. I was questing his actions and that's when I spotted a Doe out in the field so I realized he was tracking a hot line. So I took scout backed to the wound bed and he turned left started heading south and I could not fin any blood through the thicket so I had my doubts he was back on him. Talking with the hunter and his friend we basically decided this buck was going to live so I went to go get scout. I found scout less than thirty feet from my clients buck stone cold dead. The buck was doubled lung and hit in the liver. I still can not believe this buck was able to travel the total distance of 2.2 miles. Ryan is a pro staff member of Realtree outdoors. Note this buck would never been recovered with out the aide of a track'n hound. 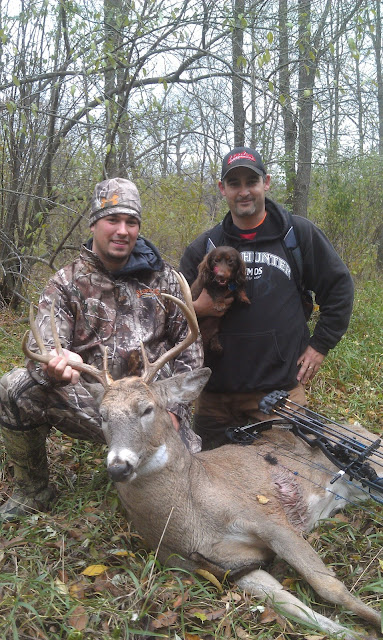