This is how hunting memories are made.  I spoke with the hunter sunday morning and he explained that he had shot a bear around 730 the previous evening, he believed it was a good hit.  However the blood trail was not very good.  We discussed all the options and he decided to go ahead and put the dog on the trail.  We arrived at the hunting site approximately 18 hours after the shot.  It was a little difficult at the beginning working out of the bait site, as this was a central hub where the bears were coming to.  once we worked out of there it was fairly easy for Cash to navigate the rest of the track.  We quickly worked though the dense cedars, through the thickets, crawling over and under logs, having to literally catch myself from being dragged over by Cash.  He was dead certain where this bear had gone.  The hunter had done everything right during his original search,  marking the sign he found,  which helped me to confirm that Cash was in fact on the line.  Low and behold we have a BEAR!!!!!!!  This was the hunters 1st bear harvest, this was Our first bear track.  This will be a story I keep with me for the rest of my life. The track was approximately 350 to 400 yards long, and through some very dense and difficult forest!!  The Hunter and his Buddy were two fantastic guys who refused to give up without exhausting all of their options, and in this case it paid off with hi fives and handshakes while standing over the lucky hunters harvest!

Congratulations to the Hunter on his 2012 Black Bear 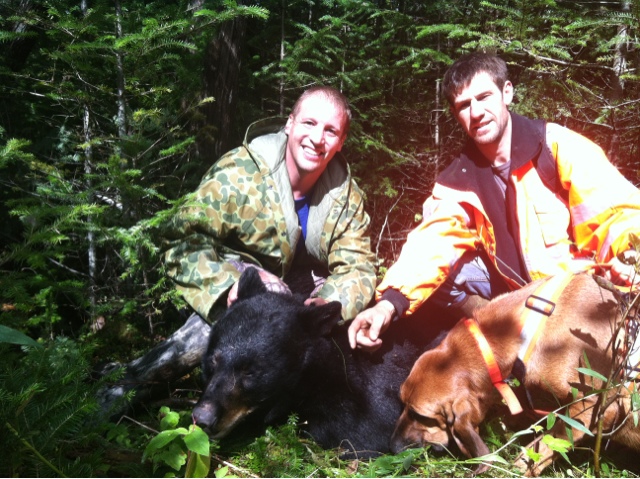