This track, as all of them are, was very interesting.  The hunter had shot a buck, quartering away, and believed it was a pretty good shot.  He had good blood for roughly 100 to 150 yards than it stopped.  We arrived about 1030pm,  4 hours or so after the shot and got right to work.  Cash kept throwing his nose in the air right from the start and I was guessing that the deer was not too far off.  we began tracking right down the same path the hunter had taken.  The track came to a river, the hunter had found blood on the other side and Cash was no different.  into the river we went and up the other back.  tracking into a small clearing where the hunter had lost blood, right as we entered the woodline I saw a pair of eyes.  I quickly pulled my spot light and saw the hunters buck, get up and slowly start walking away.  He was definitely not in great shape, however, we opted to stop and not pursue the buck, as there was a neighboring property where we could not track, and we did not want to push the buck farther that way.  We waited about 15 minutes than proceeded forward slowly so we could examine the wound bed,  we had not seen any blood since the hunters last.  The wound bed showed some gut material and a small ammount of blood.  We opted to back out and put the dog away and come back to eye track slowly.When we returned from the wound bed we were able to track only a short distance, finding a spot of blood here or there,  as the skies opened up to a downpour.  as we were searching for blood I spotted eyes ahead.  as we krept closer we were unsure if it was in fact his buck, As we approached the site where we had seen the deer we realized it was not his deer, and it was a healthy deer feeding on a bait pile.  With about an hour of searching and no luck getting too far we returned to the house yet again to get the dog, and put him back on the track.  We returned to the wound bed and started the dog,  only about 80 to 100 yards from there lay the hunters beutiful 8 point.We finished tracking and getting the deer out of there about 330 am.  Congratulations to the hunter on his 2012 harvest. 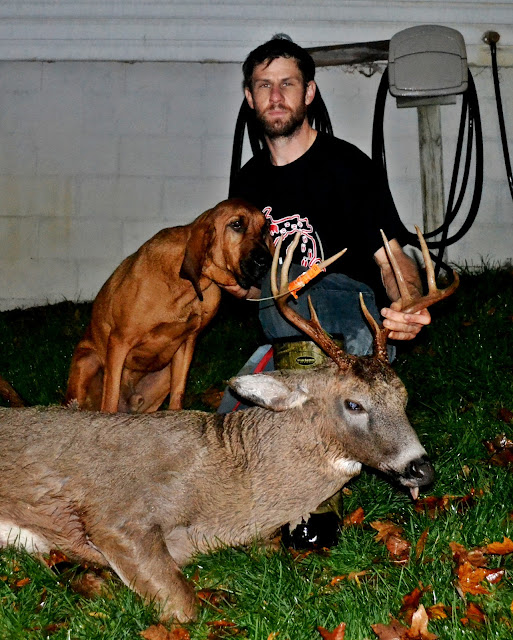 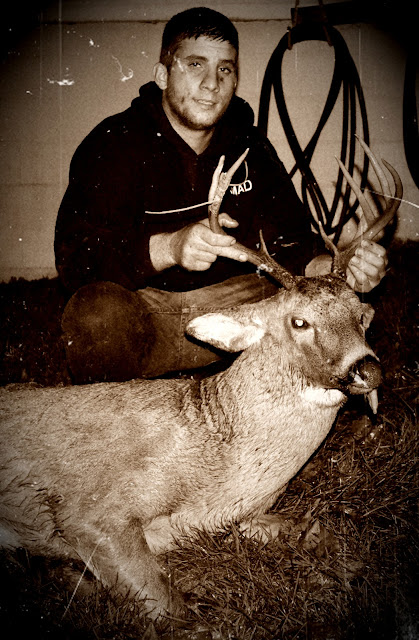 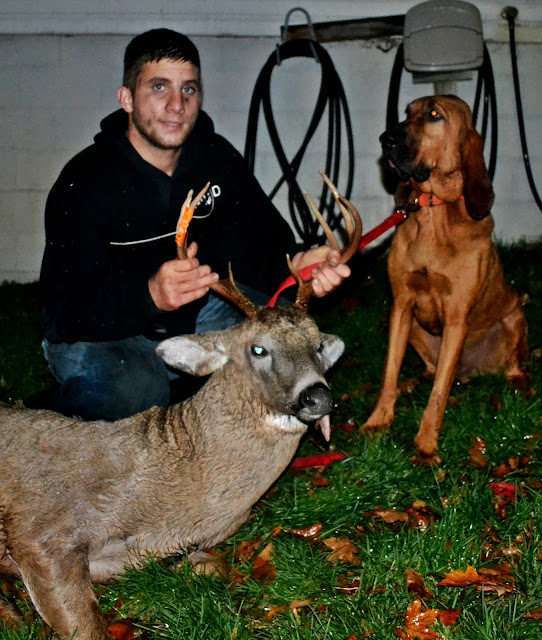 The shot was gut, liver, lung with a mid deer entry and a low exit right by the "armpit" of the deer.  i was astonished when i saw the exit wound, usually a low exit in the chest cavity would show a much easier blood trail to follow. The total track length was aboximately 600 yards
Posted by Unknown at 3:59 PM