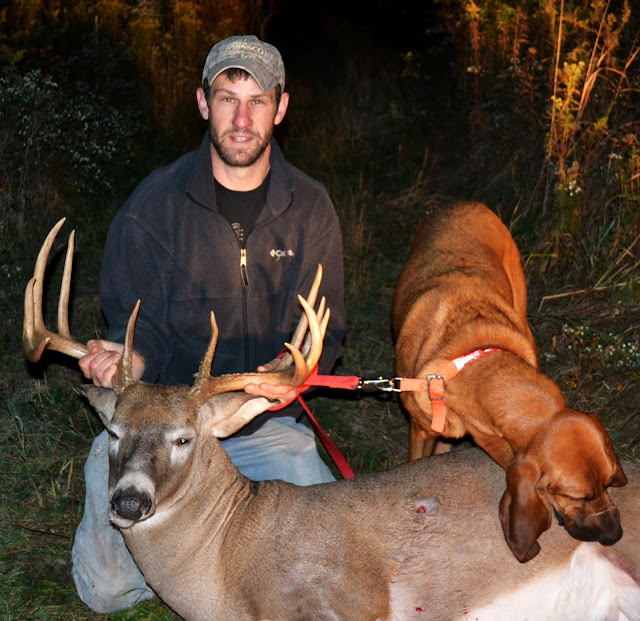 WHAT A BRUISER!!!  The hunter has spent ten years taking an empty soy bean field and turning it into a deer haven.  He planted all of the trees and brush on his property.  The hunter knew this buck from the previous year, He had seen it several times however it would not come out to where he was hunting.  So this year he had a plan.  Being that the trees on his property are still young, he could not find a good tree to put a stand in where he knew this buck was bedding.So instead of planting a tree this year he planted a 6x6 pole in the ground to put a ladder stand up against.  He patiently waited until the wind was just right and crept himself into this bucks bedding area, climbed into his tree stand, and waited.  Just like it was supposed to happen the Buck came out a few minutes before 7 pm and he layed the smack down.  Blood was very evident immediately from the shot site and he began trailing about an hour after the shot;  The trail seemed to thin and than it just disappeared, the hunter did everything right in this case, as he lost the blood he only searched a short distance, than he marked his last blood. backed out, and called in the blood tracking dogs.  I arrived about 4 hours after the shot, so it was a very fresh track for my hound, and we began to search,  In the beginning Cash was on it, but as usual was very excited and ran by the first "known" turn,  I let him work it out on his own and he quickly realized that the scent was gone.  As he circled back around he picked the trail back up and we where off,  out of the thicket, through a ditch, up into one of the food plots.about the middle of the food plot is where the hunter had lost the blood and marked it with a hat.  It was about 150 yards to this point, and Cash was on it like a magnet.we crossed the food plot without seeing any more blood.  back into more thicket,  we went about 80 to a hundred yards into the thicket for an approxamite total of 100 to 150 yards without confirming any new sign.  Than i caught a glimpse of some blood, and  from there on it was like the lights of a runway guiiding us in.  to this beautiful Michigan Monster.  All in all the track was 500+ yards and was easily navigated by Cash, because the hunter backed out immediately when he lost blood.  We finished this track in about 35 minutes it was a Lung/Liver shot, realistically this buck would have probably been found with some searching but the hunter was not willing to take the chance.  Congratulations tothe Hunter on his 2012 success!!
Posted by Unknown at 6:44 AM