October 2 I received a message on FaceBook. Darrell Casey of Ionia michigan (The owner of Shack Hunting Blinds) http://www.theshacksite.webs.com/ shot a dandy 9 point buck. With all of the EHD killings Darrell was very fortunate to see this mature Buck. While on stand Darrell had a few 11/2 year old bucks sparing around him. His blind was placed along a small stream on the edge of swamp that had really tall grass and while the young bucks where trying to feel like tough guys they actually called in this crab claw 9. Darrell was able to watch him for 45 min and as the big 9 closed the distance and ran off the young bucks that's when Darrell made the 17 yard shot, a quartering too shot. The arrow tipped with a two blade rage zipped right through him. The buck went 70 yards and bedded up in a brush island out in the swamp . Darrell waited 4 hours before tracking his buck. While approaching the area where he watched the buck bed down he noticed that his buck was still alive and walked off into the marsh following a four wheeler path. At this point Darrell backed out. I showed up and starting at the shot site and right away I was finding gut matter to confirm that the quartering to shot must have exited out the paunch. Sypris locked on right away and followed the bucks every move. At first the blood trail was weak and as we approached the area the big 9 was bedded I noticed a lot of liver blood in the wounded bed. Sypris tracked out of the thicket and on to the four wheeler path and Darrell said this is where I seen him last. We found only a few drops of blood. While tracking in the direction the big 9 went Darrell and I were looking for blood to confirm Sypris work and neither of us could find any. As we were heading into the heart of the swamp Sypris took a 90 degree turn to her right leaving the safety of the swamp into a hardwood forest. Both of us did not see any blood transfer on any the grass to confirm her work. Darrell was having doubts at this point. As Sypris and I work the woods Darrell hollers out "Do you think she is on it" I replied with yes and there is your Buck!!!!!! Darrell quickly replies "I would have never found him in here because I thought he would have stayed in the swamp" " Rob your the man". Moments like this is why I track!!!! this is what I live and train for:). 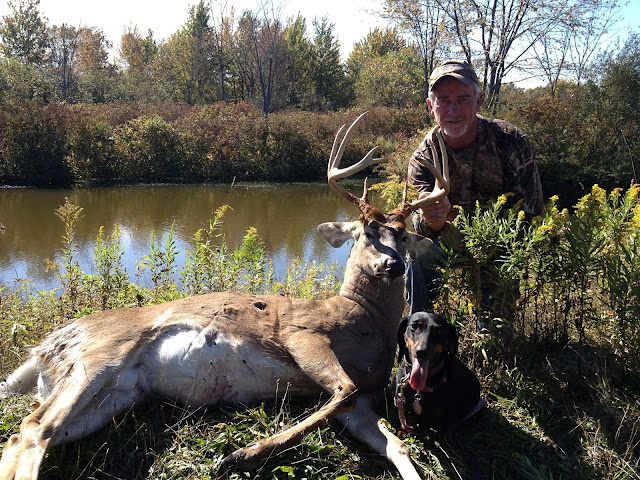