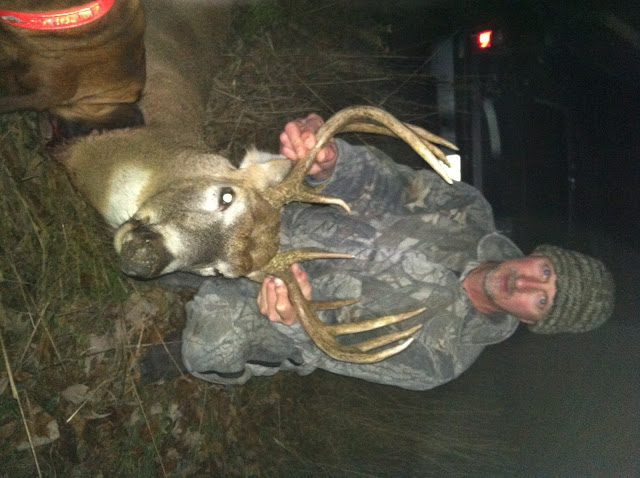 This track was a fairly typical call.  The Hunter had shot this buck in the morning, right at day break.  He did not have time to count the points, as the shot presented itself quickly.  He let an bolt fly from his crossbow, and saw the deer's head drop.  He was not exactly sure where he had hit the deer, and said he may have possibly hit a branch.  The hunter and his buddy took up the track and by all means had no trouble following the blood trail.  But than the trail ran out.  They performed a grid search in the standing corn where the blood had led them.  Unfortunately they where unable to locate the animal.  I arrived after dark that evening, and I could tell the hunter was a bit skeptical.  He kept saying, "I hope your dog impresses me."  As we arrived at the shot site it was exactly as he described,  it literally looked as if someone had taken a 5 gallon bucket of blood and started walking as they were dumping it out.  As usual Cash ran by the first known turn,  as I had informed the hunter my dog usually does,  he quickly turned himself back around and got back on the blood trail..  There was no shortage of sign, and it was easy to confirm that we were on the right deer.  Then just as the hunter described the blood just stopped,   and I mean just stopped,  nothing on the ground, nothing on the corn,  NOTHING.  however Cash was very sure of himself as he navigated up and through the rows of corn. approximately 200 yards after the hunters last blood we found the beautiful buck.  The hunter and his friend stopped about 75 yards shy of him while they where grid searching.  The deer had been shot right in the bottom of the neck, taking out the wind pipe.  I have to believe that the vast amount of blood turned to nothingness due to the lack of blood pressure as the deer was running out of steam.  Congratulations to the hunter on his 2012 harvest.
Posted by Miller Deer Tracking at 3:50 PM