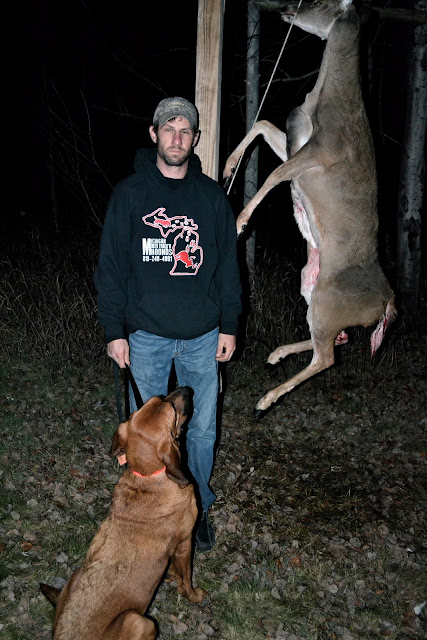 Once again I was able to use my hound for my own deer.  While last year I really did not need him , I put him on my deer simply for an easy track for him.  This year however was different.  I decided I was going to pull an all day sit.  Early in the morning I saw a few doe's, unfortunately they saw me first.  A little later about noon or so I watched a little spike horn come through my clearing.  Than around 2 o'clock came the moment of truth,  I spotted a good sized doe making her way into my clearing, She walked in straight in line with a big pine tree that is in the middle of the clearing.  I patiently waited trying to get a view of which way she would turn.  Finally she poked around the right side of the tree, still facing straight at me.  Slowly she turned broadside and began to walk, I raised my Winchester model 94 that is inscribed with my fathers name,( he bought this firearm when he was 18 and passed it on to me),  I looked through the scope and picked my moment.  It was a gimmie shot, 45 yrds broadside, BANG!!!!  She kicked like a mule and took off around the brush, I heard her crashing through the thicket, than nothing.  I soaked in the moment, gave my thanks, and sent out my text messages to my hunting party.  I waited about an hour and got down to search for sign and recover my quarry.  As I approached the shot site I was discouraged,  I found no hair, no blood, no sign that I had in fact connected with my target.  I began searching where I had seen her exit the field, and still came up empty.  Not even a drop of blood.  At this point, I had that sinking feeling in my gut that I had blown a simple shot.  There were still other hunters in the woods, that I could see from my state land tree stand, so I decided rather than continue stomping around the woods I would back out, wait til nightfall and bring in the hound.  My father accompanied me on the 1 mile trek back into the woods.  I sat Cash down and had a little chat with him.  My exact words were this, " Cash I need you right now, I need you to help me,  I know that you can't make a deer be dead, but if it is dead I need you to find it".  I started him where I knew the deer had walked, in the approximate location of my shot, I gave the "find it" command, and I truly believe he knew the genuine request that I had spoken to him before the command,  because he dug his nose down into that ground deeper than I have ever seen him work,  he walked the exact route out of the field that I knew the deer took,  walking nearly step for step where I had searched,  still not seeing any sign I was terribly discouraged,  when all of the sudden he took a hard turn into the dense thicket,  10 feet into the tangled mess I was able to shout out  "I got blood"  I was so pumped at this moment, than it was blood, blood, blood DOE DOWN!!!  The deer did not go far in all respects, however there was absolutely no visible blood until we entered the thicket ,  it would have been very difficult to find this deer, I would have probably walked right by her several times, chances are with the help of my hunting party we would have found her, but I am very lucky to have a skilled tracking dog at my disposal for just such a moment,  Thank you Cash for doing what you do!!
Posted by Unknown at 9:28 PM