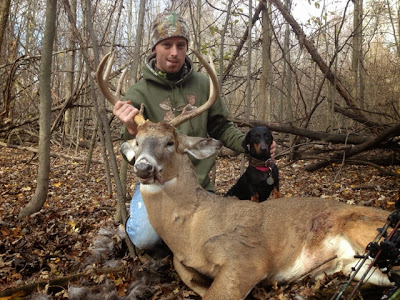 I’m writing this letter in reference to my son John’s experience with Rob Miller and Sypris from MDTH.  This began on November 8th, 2013 in Davison, MI while my son was bow hunting that morning at 1030 when he heard a noise to his left and was able to see one side of a set of antlers and knew it was a shooter. John grabbed his bow and was able to grunt and get the buck to stop and shot while quartering away. The buck ran thinking he missed when he saw the deer crash and fall appr. 40 yards away and get up and run again. After the shot and reviewing it he noticed a branch was still moving in his shooting lane. After an hour of waiting I (Dad) met up with John and found his arrow near the sight he shot him. A full pass through with bright red blood the entire arrow without bubbles or foul smell John felt it was farther back possible liver and we decided to give him time. Sitting near the edge of a cut corn field we realized he had ran across to another wood lot and needing to get permission we back out.

John called Rob Miller to get his advice in which he reaffirmed that he felt it was most likely liver/gut shot and that he was committed all day and was able to help us if needed late evening.

John and I decided to go back after obtaining permission from the land ownerat 1630 hrs to pick up the track and was able to track him to the edge of the wood lot. Had blood up to appr 15 yards from the wood lot and marked it and were unable to find any other sign in the wood lot.

Met with Rob and Sypris at appr 2130 hrs and started the track which was a first for us and was very impressed with Sypris and Rob and their dedication and professionalism. Sypris was able to pick up the track with minimal issues and once on fresh blood from where the buck bedded down Sypris was hot on the trail. Tracked the buck appr 1.4 miles were he was jumped by Sypris and Rob and Rob felt we should back out and come back in the am.

After a very sleepless night we returned Saturday morning to were the buck was last jumped and while waiting for Sypris and Rob, John wanted to glass the woods and appr 50 yds from where the buck was jumped the night before there he lies. Rob and Sypris arrived and finished the excellent tracking job that Sypris started 13 hrs prior and what an exciting moment for all involved and undoubtedly we would have never found this trophy without Sypris and Rob.