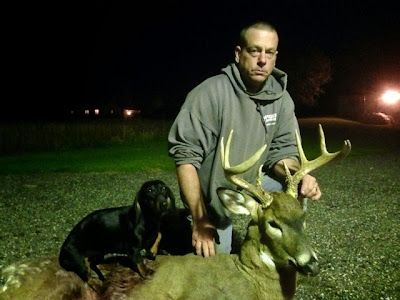 Matt had this 125" class 9 point slip in with in minutes of him climbing the tree with his climbing stand. He made a quick shot hitting him center mass. Matt could see his blood soaked arrow so he knew the shot was a good one. Getting down and inspecting the shot site he found white hair and thought the worse. He followed the blood trail for about 50 yards and he did not like the sparse blood trail. Over the years they have used tracking dogs with no success. He recently was told about Rob & Sypris and thought this would be a good time to see a proffesinol tracking team in action and to see first hand if a dog can really track a deer. The phone call was made and arrangements where in place for Rob to show up around 9 PM. Once Rob showed up to Matts house the wind was really whipping out and Rob suggested this high wind may have a factor in Sypris work. We made the drive to Matt property in Perry Michigan and took Sypris to the shot site. Rob inspected the arrow and he knew instantly they buck was fatally shot. Rob looked at the hair and notice it was not white hair. It was body and Rob told Matt let's go find your buck!!! Sypris literally ran full speed to Matts buck that was over 400 yards away. She covered that distance in minutes and left a great impression on what a properly trained hound can do. After recovering the buck I told Matt a dog was not truly needed. We had blood most if the way and a decent tracker would have found him. Maybe not in a few minuets like a dog but none the less they would have found him. Matt said that was the best $$$ spent.

Posted by Miller Deer Tracking at 11:46 AM