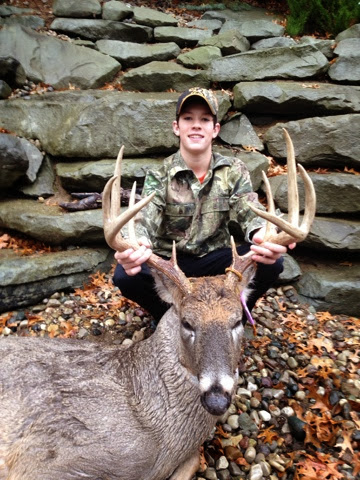 Walker West age 16
On a crisp fall morning, perched in our double stand, my brother (Nash 14) and I (Walker 16)  with my dad down below, watched the world come alive. We were waiting patiently to see a hunters dream or at the least a glimmer of food for the winter emerge in the morning light. Of course unaware of what this day would have in store for us our adventure began. In the blink of an eye there were bucks everywhere it didn't seem real, most of which would be dandies in a season or two for certain. It seemed the lucky stand we call "The Nash" after my brother was looking lucky again. Suddenly out of the brush to our right we saw a huge buck. He was one that when you looked at his body and he turned his head you could just see his white horns rotating. This was the day that was decided Nash would have first shot. I whispered to my brother  to be steady and site in on the buck and shoot, I will back you up...our dad was leaning up against the tree underneath us and we could hear him say "shoot, shoot!" Nash pulled the trigger of his muzzleloader and a puff of white smoke appeared in front of me. We weren't sure if it was a misfire so I raised my muzzleloader with the thought of this buck not getting away and pulled the trigger for a follow-up shot. Just like that the buck spun around and took off and he was gone. It looked like my brother and I both hit the buck hard !!! We waited about an hour before we got down out of our stand. It was time. We then got ourselves lightweight by taking off our jackets ,overalls and packs . We went to where each shot was made and nothing was found. We went about 10 yards this side of the river and saw a few drops of blood, now we just had to figure out how we were going to get across the river. We finally found an old aluminum pole 8 inches in diameter and about 25 feet long stuffed in the brush along the side of the river. After a half hour worth of work we finally got the pole across the river and shimmied ourselves across. We went to where the buck had landed and it was as if someone was pouring blood out of a gallon jug for 75 yards. We knew we had our buck but then to our surprise the blood stopped instantly! We had never seen anything like that before. We searched around for about an hour more in the thick grasses and muck and lost the track of the buck. We backed out and went back to our truck. My dad called his friend Robert Miller, who is a licensed deer tracker, with a hound called Cyprus for some help. It was amazing to watch this little hound who was no bigger than a corn nubbin get to work! We began our coon hunt, entering into private property where the neighbor fortunately is a hunter and a gentleman, and allowed us to tromp around their property for hours trying to find the buck. It seemed as if we were pushing this monster and couldn't understand how he could still be alive? It was getting late we needed to back out and my dad wanted to get us home to bed .It's an awful feeling trying to go to bed when you know that you've shot this majestic beast and still haven't found it !!! My dad reassured us he would go back out to meet with the tracker and they would find the buck. It seemed like I just closed my eyes and my mom was waking me up telling me to go downstairs and help dad. I ran out into the garage looking at the driveway there my dad stood with the big buck, I couldn't believe my eyes !!! "You found it," I said, "I can't believe you found it!  Where was he?" He said they found him just 10 yards past where we had left off. This was one determined deer. I looked to see where the buck had been shot, one of our shots was a little back a little low and quartering away. The other shot was 4 inches in front of that a little low a little forward and quartering away also. It probably wasn't our best shot but it got the job done thank heavens! My dad hung pictures of us and the buck in his business, I'm not sure who's more proud my dad or us??? An epic story to add to the West household for sure!
Walker T West 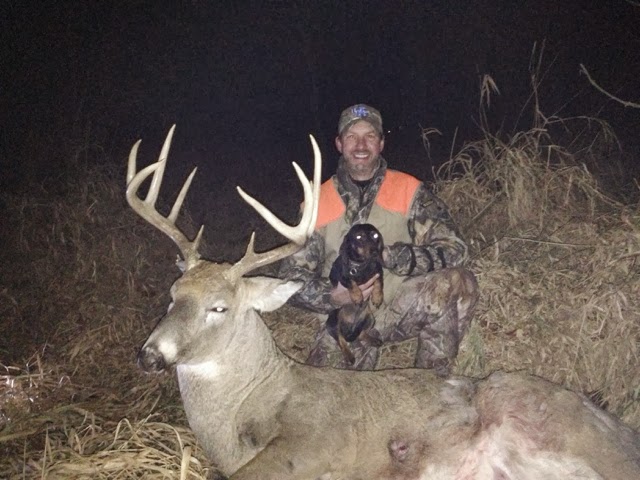 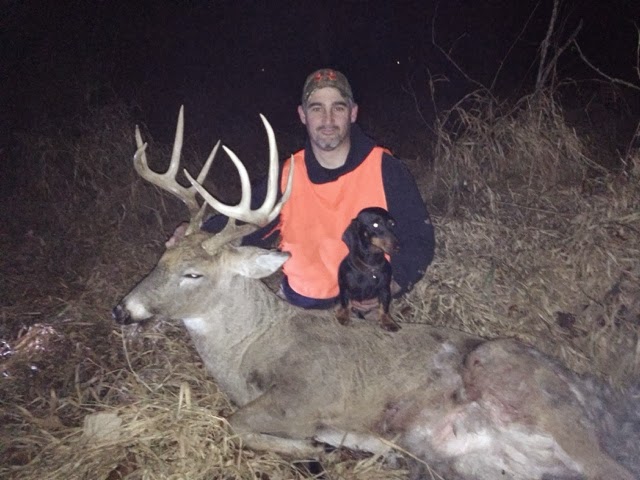