Coming down to the final off season Training sessions 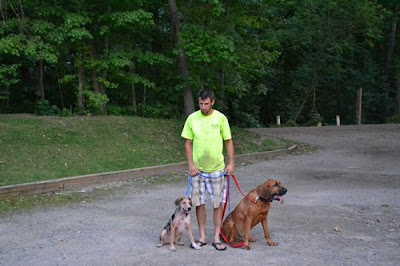 It is coming down to the final training sessions before the dogs hit the field for the 2012 hunting/tracking season and all of us have been working hard to make sure our dogs are on top of there game. As well each handler needs the training sessions so that we are on the top of our game as well. I got a really good reminder this weekend of the trackers golden rule TRUST THE DOG. This is not easy and it comes with a lot of responsiblity to the dog. The dog counts on the handler to read and understand the subtle signs that they give of during the track, the trust comes into play when the dog knows that they are on the line and is giving the handler all of the indications that they are on. Many times we as humans believe that we know better. Every year I hear the tales and advice that has been passed on for generations of what a wounded deer will do. Each and every track I seem to learn something else a wounded deer will always do. I do not believe that anyone could tell you what a wounded deer will do. I can however tell you what they will not "always do". A wounded deer will not always run to water, they will not always run a circle to find our what spooked them, they will not always take the easiest path, i could go on an on. In this weekends training session with my two dogs I faced several challenges. My newest dog Dusty, has shown tremendous promise in his training, however he has led a very concealed life from the beggining. He was born and raised in rescues with very little exposure to well.. Anything really, when we brought him home everything frightened him, the stairs, the t.v. phones ringing.. Everything.. I have worked very hard with him and normal everyday life has seemed to calm down for him. His tracking training has gone very well,, For the most part. He still has not had a ton of exposure to the wonders of the woods, and still seems to be frightened easily especially when he cannot see very well. I ran a night track which was approximately 800 yards long and aged 12 hours. It started in a field on the edge of a woodline, at the start he was off and moving as I expected, but as soon as the track went into the darkness of the woods he did not want anything to do with it. he kept circling back to walk out to the field. After much labor and encouragement we got going however the entire track was very difficult in that he kept getting side tracked by noises and shadows from my light. We did end up finishing the track however I had to work extra hard and continually had to bring him back to the right track. I still believe in this dog and will continue working with him throught the next year. *** I have decided to keep him out of the field this year except on deer for family and friends.***

My other seasoned dog "Cash" offered me the lesson. As I was setting up my GPS to run him on his training track I accidentally erased the track that I had laid from my gps. So i went into this track knowing only a few things, Where the start was, the direction I had started moving, i had one reference of a hunting blind i had walked past while laying , and one waypoint set at the end of the track. I went into this track basically knowing only what I would know in a real tracking situation. I had no choice but to read and trust my dog. He had a great run on the track, other than one location where he ran by a turn. He has some wonderful "tells" when he is off the track. An intense zig zag pattern, and continual large circling pattern. When I observed these tells for about fifteen minutes I knew i had to take him back, I checked my current track on the GPS and escorted him back to where he was running in a distinctive line, I let him begin his search pattern again, and off we went, about ten minutes later we tracked right by the blind i had remembered on off into the thickets we went. I did not recall walking through such thick brush, but Cash seemed to be sure, so I continued to follow him. Not 15 minutes later he found is reward. This track was approximately 1000 yards ( a little over a half mile) and aged 24 hours.